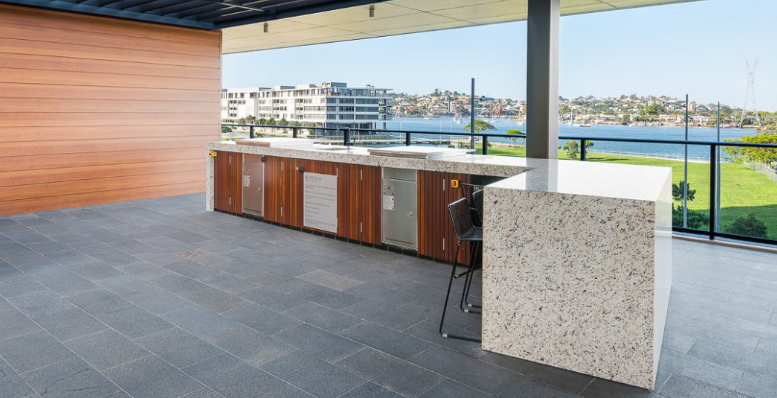 When approached about replacing the barbecue units in a Newstead apartment’s recreational space, PARKQUIP was able to engineer an invaluable solution that was both time and cost effective.

While the domestic barbecues looked great they quickly proved unfit for their intended purpose. With the apartment development having only been completed a few months prior, a solution with minimal disruption to the area and minimal cost was priority.

It is an unfortunate situation that the team at PARKQUIP deal with all too frequently but could be easily avoided at the outset by installing a barbecue unit specifically designed and manufactured to suit unattended public use areas.

There are many issues surrounding the use of domestic barbecue units in unattended public use areas. Apart from the obvious safety issues associated with misuse of or incorrect and dangerous ignition of gas, domestic units are difficult and time-consuming to keep clean making them a hygienic hazard.

Correctly designed public use barbecues are fitted with 304-commercial grade stainless steel hotplates and are designed without grills or corners and crevices that will trap food and bacteria. The solid style of the plates makes cleaning easy and features like an automatic timer means the barbecues cannot be left running indefinitely, saving significantly on ongoing running costs.

In the case of the Newstead apartments, the team at PARKQUIP were able to custom design a solution that incorporated the Park Pro King Plate Gas BBQ into their existing built in outdoor cabinetry with minimal disruption to the facilities.

PARKQUIP offer Australia’s largest range of barbecues designed to suit public use installations. Get in touch with the sales team to start a conversation about your next project.

Our extensive range of commercial park barbecues are specifically designed for safe public use and are built tough to last in our Australian outdoor conditions. Why not take a look and contact us about your project today!

Stay Up To Date